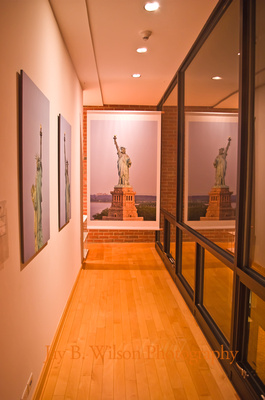 The other night I attended the opening of "Journey of Justice: Looking for Liberty" at Concordia College's Osilas Gallery in Bronxville, NY.  The show features a collection of works from Tom Block's "Human Rights Painting Project" paired with an array of photographs of the Statue of Liberty by a friend of mine, Lisa Sorensen.

Lisa hired me to shoot the opening reception, a difficult proposition given that I was quickly enamored of her work, and fascinated with her talk on the process she used to photograph the Statue and print the resulting images.

Lisa's final work, which ranges from glicees mounted on brushed metal, prints on beeswax, and more, ranges from iconic views of Lady Liberty, with the delicate pastel skies of early morning over New York Harbor, to incredibly detailed closeups of the statue's hands, torch, and crown.  The richness and luster of the images is incredible seen up close, the work made more impressive by the lack of any Photoshop magic.

Lisa's series of photographs, which originated as a private commission, were shot from a chartered helicopter.  Lisa spoke fondly of the pilot, a photographer himself, who was excited to take an artistic flight - a departure from his routine of carrying business executives and tourists around New York.   At times, they got within 500 feet of the copper lady, giving us a perspective rarely available. 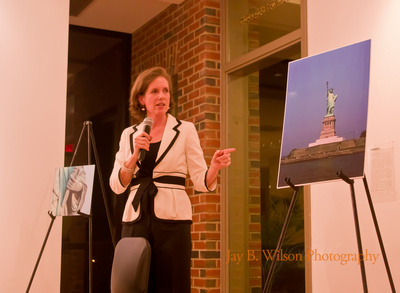 If you're in the area, I highly recommend stopping by Concordia to see the exhibit, which runs through April 5th.  And it's certainly worth the 30 minute Metro North ride from Manhattan.  You simply won't find more powerful, moving images of Lady Liberty anywhere else.