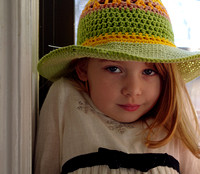 We're taking more photos of our kids than ever - after all, the ubiquity of camera phones mean that whether it's on the playground, at an ice cream shop, or during a ballet recital, a camera is usually no further away than a pocket or a purse.

But are you making the most of those Kodak moments?  Do most of your photos disappoint you, and wind up forever tucked away on a memory card or on your iPhone camera roll?  Do your Facebook profile pics really show off your gorgeous kids the way you know them to be - full of personality, energy, and wonder?

A couple of recent books - "Envisioning Family" by renowned family photographer Tamara Lackey, and "Secrets of Great Portrait Photography" by Pulitzer Prize winning lensman Brian Smith, aren't geared towards amateur photographer, but they offer some great tips on portrait photography that I believe, combined with some of my own experience as a family photographer, will help take your snapshots of your kids to the next level.

So without further ado, here are the Top Ten Tips for Mom (and Dad) Photographers:

10.  Get down on your knees  No, not to beg your kids to sit still, but to get on their level.  There's nothing worse than a bunch of

photos of a toddler taken from five feet overhead, with all the mess of a trashed playroom encircling the little one like Geoffrey the Giraffe threw up all over the place.  And - ugh! - you can't show those pics to anyone, because look at what a mess the house is! I can't tell you how much cropping I've done at my wife's request.  As famed photographer Robert Capa once said, "if your photos aren't good enough, you're not close enough."  Or, as Smith says, "find the right angle" by getting down to your subject's eye level, or even shooting up at them, using the ceiling or the sky as a seamless backdrop.

9.  Don't pose your kids.  First off, it never works, does it?  They get skittish and bored and those "awww...Mom!" looks are guaranteed not only to ruin the photo, but perhaps the rest of your afternoon.  Instead, do what I do, and candidly take photos of your kids while they're otherwise distracted while playing, reading, or...gasp...even watching TV.  One of my favorite shots of my daughter gets people saying "wow, she looks so contemplative, so deep in thought!" If they only knew she was watching Dora the Explorer when I took that one.

If you do want some structured shots of the kids with each other, or with grandma, use some of what Lackey calls "organic directive posing" - a technique that's difficult for even the pros to master, but essentially boils down to setting up a shot between, say, two siblings, but rather than having them focus on the camera, having them interact with each other.  This is how you get great expressions out of your kids, because they're behaving naturally rather than feigning smiles for you.

8.  Make group photographs fun. Another approach to posing comes from Smith, who eschews the "shoulder to shoulder" group posing most of us are all to familiar with in those Sears Portrait Studio images, and instead creates some theater around a group shot.  He calls it "Creating a Cooler Reality." Spread the kids out a bit, have one playing with a favorite toy, while another plays the piano and dad reads the paper, for a  humorous and memorable shot.  Not only will the kids buy into the "photo shoot" you'll get some great expressions and yours will definitely not be the typical Facebook cover photo or holiday card.  Speaking of cards, I can't think of a better example of this concept than photographer Ryan Gibson's recent holiday card.

7. Mix it up. Smith also talks about using unexpected props, backdrops, and unexpected in his images of sports stars, Hollywood A-Listers, and Wall Street CEO's.  He posed Richard Branson in a spacesuit on a beach, put a race car driver in full uniform in his kitchen, drinking coffee, you get the idea.  I'm not suggesting you photograph little Mikey in a church with his baseball cleats on, but photographing your kids against a rich brick wall, on a ride at an amusement park, or in your office chair (especially if it spins!) can create an impactful portrait by combining putting that familiar face in a less familiar setting.

6. Get your kids interested in photography.  Let them take pictures with your camera phone or inexpensive point-and-shoot.  The more they understand and enjoy taking pictures themselves, the more they'll be interested in being the subjects of your photos.  My daughter went from hiding from my camera to becoming a real ham in front of the lens once she learned how to take her own pictures at the age of two.  Better yet, get your child her own camera. Most of the kids' cameras on the market are, frankly, pieces of junk - I'd recommend a durable, impact and water resistant camera like the Nikon Coolpix S30....which you'll find a worthy camera to own for yourself while not worrying about your three year old dropping it in the toilet.

5. Get to know your own camera.  Professionals like Lackey use a camera like an extension of their own eyes - they know every feature, function, and setting and can adjust them on the fly, no matter how quickly her subjects are moving around.  You may not be a professional, but her advice to "understand how your camera works to appreciate all the power you have at your fingertips" holds true for even the casual photographer.  Read your camera manual, and then read it again.  Even the simplest digital cameras and camera phones have powerful features that, once you become familiar with them, will take your images up more than a notch.

4. De-clutter - if not your house, your photos.  When shooting, get the "head in an empty spot" says Zack Arias, a

commercial and music photographer.  Especially when photographing kids in our homes, the background can be pretty

busy and distracting.  Try to at least get your little one's head in front of an empty wall or open window, to bring the viewers eyes directly to your child's face.  Thomas the Tank engine and Elmo can photo bomb as badly as your tipsy friend Kelly at happy hour.

3. Photograph them in action.  Your kids are hyper, aren't they?  Capture the running, jumping, swimming, leaf-diving moments while you can - soon enough, they'll be teenagers who can hardly be extracted from the couch.  A great technique for showing action is panning, and while it can be difficult to master, the idea is to move the camera with the running/leaping/swimming child, which blurs the background and conveys a sense of movement.  Fortunately, the default shutter speed on the iPhone is ideally suited for panning - hold down the shutter button (the button you use to take the picture) and don't let go.  Move the camera from left to right om time with your running child, let go about halfway through, which triggers the shutter - and, this is important - keep moving on the follow through.  It takes some practice to get the timing right, but the results can be spectacular.  If you're still using the

default camera app on your iPhone, I highly recommend the free Camera+ app.

2. Safety.  Turn off geo-tagging on your camera, if it has that feature.  Don't add a location to Instagrams and Facebook photos of your kids.   Make sure your Facebook profile is private, and don't Tweet images of your little ones, especially with identifying information.  And be aware of physical hazards as well - as Lackey says, while an urban shoot can add rich backgrounds to your photos, "be extra conscious of what you might find in those visually striking alleyways."

1. Get the photos off your phone or memory card. Now that you're taking great photographs of your family, DO something with them.  From photo books to mugs to canvas gallery wraps, photos are meant to be seen, and not just on your little  iPhone screen.  You can't have too many photos of your family hanging on your walls or in your office.  Don't let them evaporate into so many accidently-deleted pixels.  Make them truly memories to last a lifetime.

What tips and tricks do you have for photographing your kids?  I'd love to hear your thoughts, experiences, and questions!