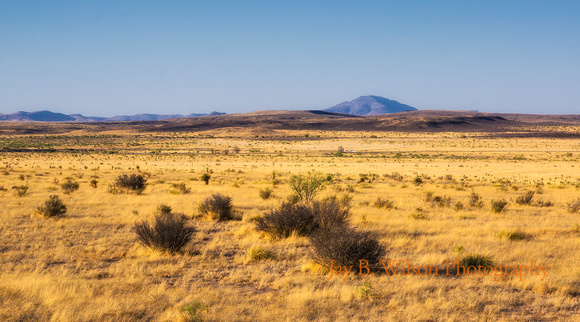 Marfa LightThe view from the Lake Flato designed Perry Ranch outside of Marfa, Texas, as seen during a Marfa Invitational tour

An island surrounded by desert.  That's how some describe the small ranching town of Marfa, Texas.  With a population of just under 2,000, Marfa is an unlikely destination for the art and fashion crowd from New York and L.A., but that's exactly what it's become.

Why this little town? Marfa was founded as a railroad water stop back in the 1880’s. In 1971, the artist Donald Judd moved here and began to install his minimalist sculptures in the Chihuahuan Desert surrounding the town.  Although Judd passed in 1994, his legacy continues to draw artists and thinkers from around the globe.

With this context, enter Marfa Invitational, an arts fair founded by Michael Phelan and now in its third year.  Unlike the closely scheduled and massive Frieze and Independent arts fairs in New York, Marfa Invitational attracts an intimate crowd, who are treated to a weekend of bespoke experiences to go with their dose of contemporary art, presented by a dozen galleries.

Getting to Marfa is half the fun.  There are a couple of routes to take, one starting in El Paso, and one in Midland.  Marfa is, according to Google Maps, just under three hours driving time from either city. That said, that algorithm doesn’t account for the long stretches of empty, 80 MPH highway that lead to Marfa, so your drive might go faster. Flying into El Paso, one heads southwest along the Rio Grande, whereas the Midland route takes you south through the seemingly endless, dystopian landscape of the Permian Basin, the largest oil field outside of Saudi Arabia. 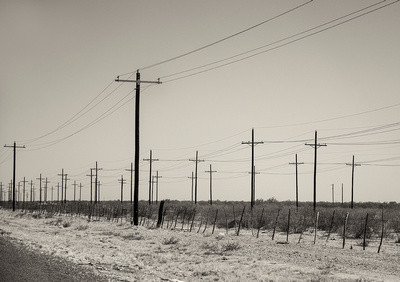 This year, Kristin Peterson Edwards, the art and travel advisor, and I opted for the Midland entry point, and jumped in our rental - a red pickup truck, which felt right for the landscape.  Indeed, the truck came in handy later, when we explored the dirt roads of Valentine, an even smaller – population 134 – neighbor of Marfa.  (NB – Valentine is home of Prada Marfa – the famous art installation).  You’ll drive right by Prada Marfa if you’re coming in from El Paso, and miss it entirely when coming from Midland.

Arriving in Marfa, we checked into the Thunderbird Hotel – a favorite – and headed straight for the Invitational, a short walk away.  Everything in Marfa is a short walk away!  We took in work from the likes of Emma Stern, Charles Harlan, and Evgen Copi Gorisek.  Gorisek - originally from Slovenia and now living in Berlin - had just arrived in Marfa, his first trip to the U.S. Talk about culture shock.  Gorisek, who was represented in Marfa by Bill Brady Gallery, shared that his next stop after the Invitational would be New York City – sure to be another shock. 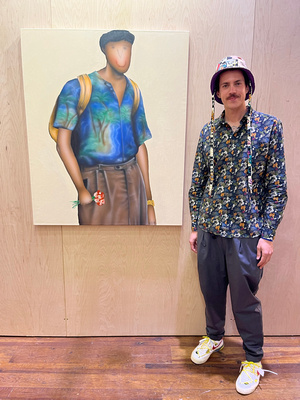 Our favorite works were off the beaten path at Voltz Clarke Gallery, who’d set up shop in the Hotel Paisano down the block.  Voltz Clarke, which brought the incomparable Field Kallop to the Invitational last year and has been wowing New York with exhibitions from Holland Cunningham, Natasha Law, and Nigerian-born Uzo Njoku of late, once again made an impact in Marfa this year with Spanish painter Xevi Sola’s bold, figurative portraits.  The colors, form, and intimacy of the work was magnetic, drawing a viewer’s gaze even from across sleepy Highland Street. 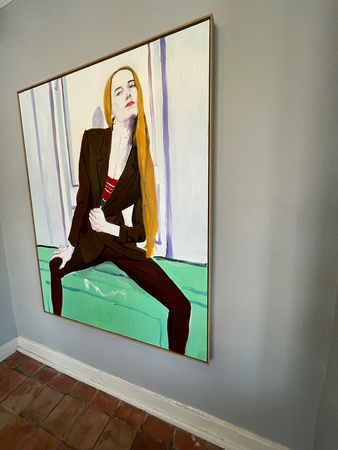 Speaking of the Hotel Paisano,  the grandest building in all of Marfa, it’s where Elizabeth Taylor, James Dean, and Rock Hudson stayed while filming George Steven’s epic “Giant” back in 1955.  The film, known for being Dean’s last before his tragic death later that year, was ahead of its time in calling attention to the racial inequity between Whites and Mexican-Americans, and for Taylor’s unabashedly feminist character, Leslie Benedict.

Back to modern-day Marfa.  While VIPs at the Invitational were treated to nightly dinners by Chef Shawn Cirkiel of Austin’s Parkside, we were on our own for breakfast and lunch every day, and didn’t stray from our two standbys, The Sentinel and Para Llevar.

The Sentinel, which sits across a dusty street from the former Godbold feed 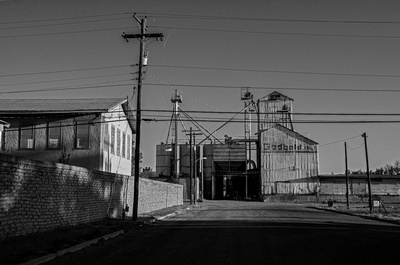 mill – a visual delight – is the local Marfa newspaper and coffee shop.  Its chorizo breakfast tacos are as good as any we’ve had in Texas, and its beautifully curated shop provides its own visual delights while waiting in the rather slow moving – we’re-not-in-New-York-anymore morning queue.  A back garden provides a serene atmosphere to enjoy the crisp, cloudless Western Texas mornings.

For lunch, as much as we’re tempted to try Marfa’s (admittedly few) other restaurants, we keep coming back to Para Llevar, on the south side of town.  The south side of town means that it’s about 200 feet from the north side.  The upscale deli’s wood fired pizzas are the popular choice here, but we keep coming back to their meatball sub, which is quite likely one of the best sandwiches this side of Katz’s Deli.  Again, a back garden filled with flowering cacti and picnic tables, along with a much needed touch of shade, is simply one of the prettiest spots in town. 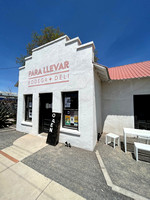 Marfa Invitational keeps us busy between meals.  Phelan does a nice job curating a series of events for VIP attendees.  Among the best was a talk with Lake Flato, the renowned San Antonio architecture firm.  But not only did we get to hear Ted Flato talk about sustainable design, we drove out to the Perry Ranch, a Lake Flato designed contemporary home surrounded by the vastness of the desert, with views of the Davis Mountains to the north and Mexico to the south.  Invitational guests sipped cocktails while having free range around the house, and we were lucky enough to get an impromptu tour from owner Ashlyn Perry.  I can’t say enough about the house and its owners, but if you want to read more, it was recently featured in Architectural Digest.

Among the Invitational’s returning guests was artist Lacey Dorn, who paired nicely with Suzanne Deal Booth to give a fascinating talk on influential Texas women, from Ann Richards to Simone Biles.  The talk was timely given the current attacks on womens' reproductive rights in this country and particularly in Texas. Dorn and Booth pointed out that while Texas politicians have been leading the charge on these attacks, it was also a Texas lawyer, Sarah Weddington, who won the landmark Roe v. Wade case.

Dorn returned to perform “Anthropologists Anonymous” wherein she asked audience members to select images from her Instagram feed.  Dorn would then expound on the life challenges and successes she’d been facing at the time the image was posted.  Dorn’s openness and willingness to share the intimate moments behind her public photos was affecting, and her empathy towards herself as she recalled struggles was a discovery for both performer and audience.

Marfa offers a surprising array of shops worth exploring.  Our favorites include the eponymous The Marfa Store, whose owners – both artists and gallerists themselves -  are incredibly welcoming, Ranch Candy, which sells a lot more than its name implies, and Communitie Marfa, where we, having learned last year that sunscreen alone will not protect against the desert sun, picked up a crushable Stetson hat.  Also worth a quick 10 minute drive out of town, El Cosmico, a popular glamping spot with a killer gift shop. 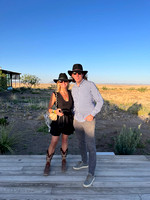 Wearing a Stetson from Communitie at the Perry Ranch, Marfa, Texas

Marfa Invitational, like other art fairs, inspires a handful of concurrent exhibits not officially affiliated with the event.   Photographer Douglas Friedman, who lives in Marfa, opened his show “Bad Hombres”.  The photographs, a tribute to the now-shuttered Mexican restaurant of the same name, was one of the highlights of the weekend.  Leo Villareal, whose mother, Jane Crockett, is the great-granddaughter of one of Marfa’s original ranchers, Lucas Brite, held a show of his generative NFT work, which was fascinating.  Finally, tucked away behind the local Dairy Queen, an eclectic group show included a couple of drawings by the British writer Anthony Haden-Guest – the 85 year old was himself sketching on the porch in the 95 degree heat.

The Brite Mansion hosted a dinner for Invitational attendees, hosted by Yvonne Force Villareal, who co-founded the Art Production Fund, responsible for the iconic Prada Marfa installation mentioned earlier.  On display at the mansion was a series of new works by photographer Will Cotton, who’d studied his cowboy and unicorn subjects at local rodeos.

Speaking of cowboys, it was the cowgirls who ultimately stole the show at Marfa Invitational. Designer Cynthia Rowley staged an 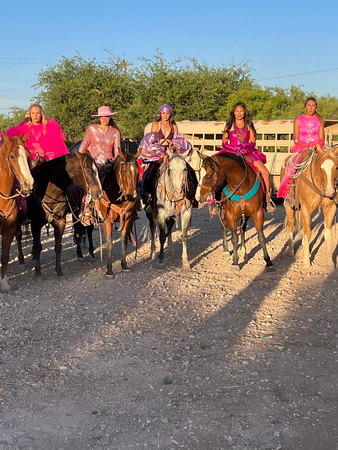 epic fashion show at an incredible venue, the Valentine in Valentine, a restored saloon and event space. Rather than fly in models from the coasts, Rowley enlisted cowgirls from nearby ranches to wear her collection on horseback.  The visual impact of the cowgirls (yes, they self-identify as such) in hot pink gowns galloping and kicking up dust as Marfa Invitational VIPs mingled with local ranch families was a fitting final sendoff to a memorable weekend.

If you want to explore Marfa for yourself, we can’t recommend it highly enough, although it comes with the caveat that one should travel there en route to somewhere else (like Big Bend National Park, which lies to the south), or when you know an event like Marfa Invitational is happening in town.

Otherwise, establishment openings may be spotty. We spoke to one bar owner who’d come into town to open his place just for a single day.  He told us he was trying to hunt down some beer for the bar. To do so, he’d been told by the distributor to try to “flag down our truck if you happen see it”.

That’s Marfa for you!

If you’d like to see more of my images of this magical little place in the middle of nowhere, you can find my full gallery of Marfa photographs available for sale here.