Giving Back with Photography

The PDN Photoplus Expo in New York City is one of my favorite events of the year.  Widely known as the premier photography trade show in the United States, I've been going for the past four or five years, but have primarily just gone to the exhibition floor to check out the latest gadgets, printing services, and equipment on display.   It's always a great time - photographers tend to an extremely diverse and energized crowd, and naturally drawn to social media - resulting in tweet-ups, photowalks, and lots of live online coverage of the event.

This year I decided to do a little more, so I went to a full day of training seminars before the show officially opened today.  Put on by 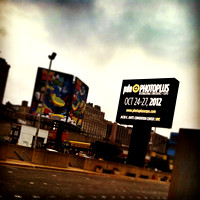 WPPI - Wedding and Portrait Photographers International - the classes featured a range of business and creative themes.

I avoided most of the wedding-specific classes (I don't do weddings) with the exception of Jerry Ghionis' opening seminar on "creating moments" which I figured would apply as much to the portrait work I do to as anything else.  And it did.  Jerry's hilarious, slightly edgy but incredibly effective approach to connecting with his clients, combined with his simply mind-blowing photographs kept us entertained for a full hour and a half.  Jerry tends to photograph very beautiful, very wealthy clients, but it was his story about photographing a less photogenic bride that was the most powerful moment of the morning.  Watching him, on video, connect with the woman, who was clearly upset about how she looked in her dress, and get her to expose her amazing inner beauty was a tear-jerker.

And that was the start of a day whose most impactful moments were about giving back.  The young but world-famous commercial and entertainment photog Jeremy Cowart, who rather sheepishly spoke about touring with Britney Spears, focused rather on his humanitarian efforts in Haiti, Rwanda, and Uganda.  The amazing images he made in these ravaged places, photographs that reflect improbable hope and reconciliation, sets his work apart from the photojournalistic style that tends to dominate our views of those places.

Despite the incredible impact those images have made - his Haiti photos were displayed for world leaders meeting at the U.N. to discuss aid packages for the country in the aftermath of the earthquake - Jeremy's most impassioned delivery was left for his work with Help-Portrait, a global initiative he started in his hometown of Nashville to give back to the community.  The idea is simple - find someone in need, take their portrait, print it, and give it to them.  Doesn't sound like much, huh?  Well, since its inception three years ago, the effort has resulted in nearly 16,000 photographers making almost 160,000 portraits for people in need - from the old woman who lives alone next door, to homeless in New York City, to sex workers in San Francisco.  The community of photographers has spread from Nashville to 56 countries worldwide. And the stories of the impact of a single image made of, and given to, somebody who otherwise would never have the opportunity to have a professional photograph of themselves brought most of the audience to tears.

The event takes place on December 8th of each year - and I've already signed up to participate, as I'm sure most of the audience of photographers listening to Jeremy also did.

After all of that positive energy from Jerry and Jeremy, we were left emotionally exhausted as we walked into Dutch portrait photographer Henk van Kooten's seminar.  A rocking video intro promised a more lighthearted, superfluous end to the day, but it turned out to be the most emotionally wrenching and powerful presentation of them all...

More on that next time.