On Location: Family Portraits on the Streets of New York 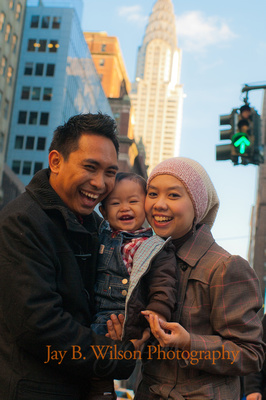 We've all seen tourists in New York City asking a stranger to snap a photo of them in front of Grand Central Terminal, on top of the Empire State Building, or in Central Park.  Perhaps you've been one of them.  Although New York City is one of the safest in America, there's understandably a moment of apprehension - is this guy going to run off with my camera?

I get asked to take photos of others quite often - probably because, with a professional DSLR over my shoulder most of the time, I look trustworthy and able to take a decent shot.  In fact, I occasionally offer, especially when I see a parent taking a photo of the rest of the family - wouldn't they rather all be a part of the memory?

So it doesn't surprise me that I've had more requests for family portrait shoots - not in a studio or in a quiet park - but right on the streets of New York City itself.  Rather than avoiding the congestion and noise of Manhattan, why not include it as an energetic backdrop to your family's portraits?

Having done several of these over the past few months, I've developed a pretty good route, which allows for intimate family portraits with several of NYC's best-known landmarks in the background, in just over an hour.  Whether they are visitors looking to immortalize their vacation, or locals looking to capture the essence of what makes them New Yorkers, it's always a great time.  The parents are alleviated of the stress of getting just the right shot while corralling the kids, and the kids, in turn, seem to love the attention.  And indeed, when we're shooting on the sidewalks, plenty of heads turn, as otherwise harried New Yorkers stop to see who this paparazzo is stalking - is that Justin Bieber? (No, it's Andy from Des Moines, actually!) 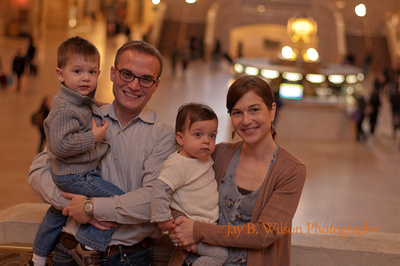 The end result are images that, if I do my job, highlight the interaction between the family members first and foremost, but that give an immediately recognizable sense of place, making those New York minutes truly last a lifetime.