Several years ago, very much through serendipity, I was fortunate to meet Kevin. The first thing anyone would notice about him is that he's blind, and walks the streets of Manhattan with a trusted guide dog, his third such service animal since he lost his eyesight. Kevin is a warm, gracious, and caring friend, and as I came to know his story in more detail, it became apparent that Kevin and I had quite a bit in common.

Kevin wasn't born blind, in fact he had perfect vision until one day, in his mid-thirties, when his eyes began to bother him. After seeing several specialists, he got the news - a rare condition would render him completely blind, and very quickly.

Tragic enough, but what really hit home for me was that, prior to the loss of his eyesight, Kevin was a photographer. An event planner by profession, Kevin was passionate about photographing the city we both love - New York. The blindness, of course, would end this passion forever, or so one might think.

After several years of friendship, Kevin came to me with an idea. There were three structures in New York City that he had always loved, but never had a chance to shoot before losing his eyesight. Would I, he asked, be interested in shooting them, with him by my side, using his memories of the buildings to essentially art direct the shoot. Of course I would, I replied.

And so it was that one cold December morning, I met Kevin, sans guide dog, at Grand Central Terminal, and took subway to the Brooklyn side of the Brooklyn Bridge - one of his three coveted architectural masterpieces. We walked along the promenade, his hand on my shoulder, the bitter winter wind cutting at my bare shooting hands, and took several images of the span. Kevin's passion was black and white, symmetrical architectural photography - with emphasis on lines and shadows. The light from the rising sun against the bridge was stunning, rendering the brown brick nearly orange in color, and casting long shadows across the East River.

We proceeded to cross the bridge itself - an exercise I highly recommend to all visitors and locals alike - although not perhaps at 8am on a windy winter morning. After arriving on the Manhattan side, we returned to Midtown and parted ways. After processing the shots, I emailed them to Kevin, and he enlisted a neighbor to describe the photography to him in detail, allowing him to combine the image in front of him, which he could not see, with the image in his mind, which was probably clearer than any photograph could be.

Kevin and I tackled the next building on his list - the storied San Remo on Central Park West, this morning. More on that to come... 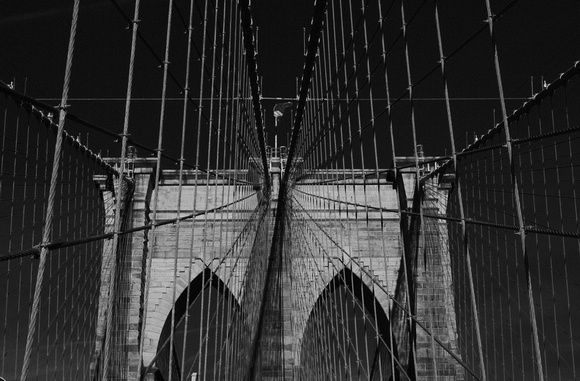 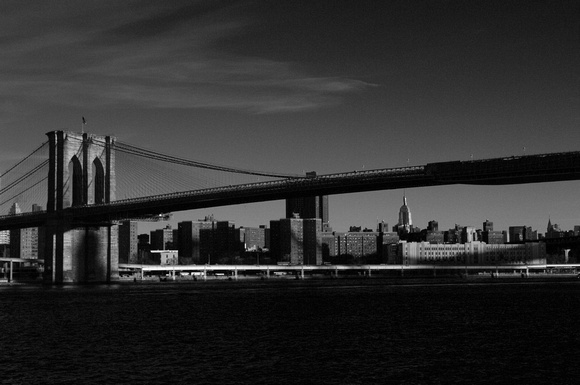 What an amazing story. In this post, on many levels, you've captured the beauty of the real world: inner vision, friendship, bridges to cross in the spirit and soul of the journey.