Joining the ranks of the paparazzi is pretty far down the list of career ambitions for me, but in the past few weeks, I've had the opportunity to join that much-maligned group on the edge of the red carpet and in the streets, on the hunt for celebrity shots.

While I've been active in event and portrait photography for years, the celebrity photo scene was new to me when I was first asked to cover a celebrity benefit at the Essex House in Manhattan.  In preparation, I did as much research as I could online (there are not really any books or classes to take on papparazism) and found this YouTube video from celebrity photog Frazer Harrison particularly helpful and entertaining.  Why is it that this field seems to be loaded with Brits and Australians?  Not sure.

The most famous papparazo, of course, is American Ron Galella, who pioneered the field, and ticked off a number of folks along the way.  No doubt, he changed the way we view celebrities as much as Avedon did.

Back to the Essex House.  I was, admittedly nervous - would the seasoned vets from Getty Images and the NY Post view me as a newbie and push me out of the way, perhaps literally?  Upon arrival, I spent some time shooting the ballroom, some of the details of the decor, some background on the folks setting up the event, before heading to the VIP room where the red carpet was located.  Sure enough, there were already a dozen photogs there, checking light, checking equipment. 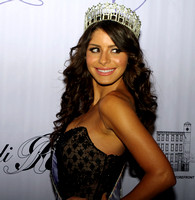 They paid me no notice.  And when they did, they were very cordial.  Granted, this wasn't the Oscars, or a stakeout of a Hamptons mansion, so the competition wasn't as fierce, but all in all, a good group.  One of the nicest, Rachel Esterday, who does a lot of great live music photography, spent some time afterwards giving me some tips and advice.

As the celebrity guests began to arrive, they would approach the red carpet, singly or in groups, and pose for a few minutes while we shot them from just a few feet away.  Again, not a major A-List event, but imagine a dozen cameras on high speed drive going off in unison.  The smell of hot batteries soon filled the air - it was palpable.  After about an hour, I had to replace my flash batteries, and they were literally too hot to touch - I had to cover my fingers with my shirt to remove them, and then worried they would burn the landmark hotel down if I left them on the carpet.

All in all, it was a great deal of fun, and I got some good shots.  You can definitely see the progression in quality as the night went on - I do most of my shooting with natural light, so I really had to relearn flash along the way.

The second experience was just yesterday.  Tina Fey, a personal favorite, was filming the movie, Admission, in my hometown of Bronxville, so I took the opportunity to head into town with a 300mm zoom lens to try to get a couple of shots of her.  I quickly spotted the paparazzi directly across the street from the set, and joined them in the hunt.  I was amazed to find that one of the guys actually had a scanner, and was listening to the radio communications from the set in his earpiece, so he knew exactly what was going on at all times.  Tina was inside, we couldn't see her, and the general consensus was that she would emerge into a waiting vehicle - giving us only a matter of seconds to get a usable shot.

The photogs paced...every time the set door opened, they froze, Canon telephotos at the ready, but time and time again, it was a false alarm. 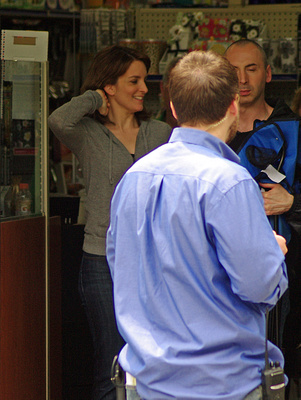 Suddenly, the word from the scanner was that she was coming out within moments, and the cameras went up.  A tractor trailer was coming down the street, and threatened to completely block our view at the crucial moment.  A photog cursed, another dashed in front of the truck and so close to the set that I wondered how she would get a shot with a 500mm lens.  But there was no time to think - I saw our Tina Prey...err...Fey approaching the door - raised my Pentax K7 and began firing.

In a moment, she had disappeared from my viewfinder.  I panicked and looked left and right.  No Tina.  I also realize that the paparazzi had disappeared.  What?  I was dumfounded, until I looked down the street and saw them running south after a black SUV.

It was over like that.  I cursed and checked my camera - one, maybe two usable shots. A quick sigh of relief - that was better than nothing, and it was a great learning experience.

See you on the red carpet!