A while back, I told you about a project I’m working on with my friend Kevin, a former photographer who lost his sight in adulthood.  Kevin and I spent a chilly – nay, frigid – December morning walking the Brooklyn Bridge, his memories of the iconic structure guiding his art direction of my photographs.

After sending Kevin several of  my favorite images, he had a sighted neighbor describe them to him in detail.  Indeed, the project seemed to be working, as another friend who was familiar with Kevin’s earlier work said “these are classic Kevin images.”

Next up on our list was The San Remo, and if you’ve spent any time in Central Park, you’re probably familiar with the legendary 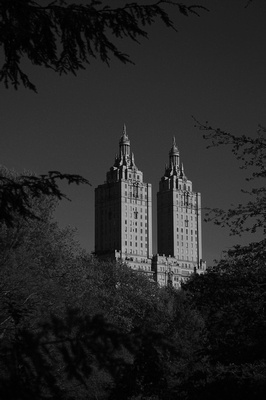 two-towered residential building, which looms gracefully over Strawberry Fields while sheltering such residents as Demi Moore, Bono, and, in earlier years, Rita Hayworth.

We started at the base of the building, on Central Park West at 74th Street, before moving into the park, walking slowly south of the building, before turning east and getting a great perspective of the San Remo through the newly-greening trees.   The image to the right was taken near Cherry Hill, just south of the Lake.

Although our focus was the building itself, Central Park early on a spring morning must have presented a wonderous departure for Kevin, who is so highly skilled at navigating even the most congested of midtown pedestrian and vehicular traffic.  A steady breeze rustled the young leaves of oaks and maples, turtles splashed into the water upon our approach, the gentle hum of bicycle tires and distant dogs barking, the scent of lavender and cherry blossoms in the air - I found my own senses of hearing and smell becoming more important, realizing the beauty of the park is only partially a visual one.

We reached a point where it was time to go - a cab ride down the park drive, back to the din of midtown, where I dropped Kevin off on Lexington Avenue - and for the first time in my experience with him, had to point him in the right direction.  Perhaps Central Park is truly that transporting that even one who can't see it is nearly overwhelmed when returned to the reality of the urban environment that surrounds us.

Later, I emailed Kevin several of the images, along with my own descriptions, one of which I include here. 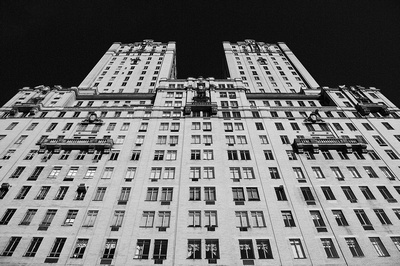 Taken from Central Park West, in the dead center of the San Remo, looking up.  The image is in landscape orientation, and although I usually think of the building as narrow and tall, this perspective shows how wide - a full city block - it really is.   The image is perfectly symmetrical, with the exception of the angle as one looks upward - but otherwise is balanced, and seems in some ways to be anchored by the two major balconies at midpoint on each side.  Each balcony is about four or five windows wide.  There is another significant balcony about four stories higher, this one in dead center, serving as a center weight to the composition.  I converted this to black and white using the infrared filter in Photoshop, which brings out the nearly-white tone of the limestone.  The sky is nearly black, in stark contrast to the building, and the blackened windows add to the contrast.

Kevin’s screen-reading software spoke that description, along with the others, giving him, I hope, a pretty vivid view of what I had seen, and he had been present for, on that spring day.  Kevin wrote back, and said words that I will never forget:

“Thanks…for seeing me as someone who is not without vision—just without his eyesight.”

How true that is.  One’s eyes may stop to work, but we can never really lose the ability to see.