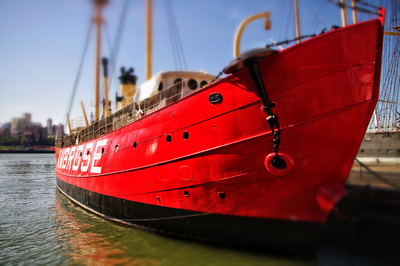 South Street Seaport.  For many locals, the name conjures up images of tourist traps, bad food, and street hawkers.  One of those places that we probably visited on a high school field trip, but never returned to once we began living in the city.

I was of the same mind, until I recently had a chance to revisit the area in preparation for joining the vendors at the fairly new Fulton Stall Market – an open air marketplace featuring artisanal foods and art which is open Saturdays and Sundays.   And I was pleasantly surprised.

Yes, the touristy restaurants on Pier 17 are still there, as is the rather nondescript shopping mall, but take a walk along some of the cobble-stoned side streets, and you’ll find an up and coming residential area, with great shopping, food, and, of course, history.

One of my favorite spots is Jack’s Stir Brew Coffee on Front Street.  Fulton Stall Market manager Amy Weeks introduced me to the place, and she was right – best coffee in New York.  And the scene is primarily locals – dogs hitched out front, newspapers in hand.

The Pier itself is actually quite attractive, during off-peak hours.  You can sit and watch the ferries and fire boats cruise up and down the East River, under the majestic backdrops of the Brooklyn, Manhattan, and Williamsburg Bridges.  And the breeze at the end of the pier makes even the hottest summer days in the city more than bearable.

While the world renowned Fulton Fish Market has long since left for new digs in The Bronx, the remnants of the once-thriving seafood trade remain, with faded signage, abandoned (or more often, repurposed) warehouses and stalls.  Opportunities for great photography abound, whether they be graffiti-strewn walls, the cobblestone streets, or nautical elements that pop up around every corner. 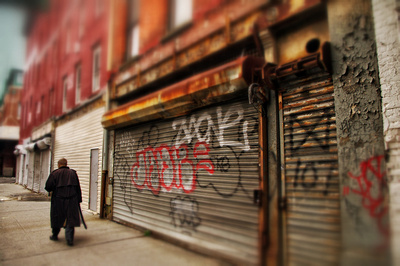 And the Seaport area is one of the few remaining places in Manhattan that has not been completely Disneyfied or gentrified – ironic given the common perception of the area as being bland or touristy.

I'd be remiss if I didn't get back to the Fulton Stall Market - it's a great collection of 15 or so vendors every Saturday and Sunday (yours truly included.) My favorite thus far is NY Farm to Door, which brings amazing grass-fed meats to the city, including the best hamburgers (and yes, I include Shake Shack) I've ever had.  I brought my hot-dog-snob two-year-old son there yesterday, and he loved the version they offered, along with a heaping serving of shaved ice from Snow & Tell.   Artist Naima Rauam's watercolors of the old fish market are amazing - she basically lived among the fishmongers for years, documenting their travails with her brush.  You can read more about Naima here.   And finally, The Proffertjes Man - serving up addicting mini Dutch pancakes as the salt air flows in off the harbor on an early weekend morning.

So do yourself a favor and take the 4 or 5 train down to Fulton Street and check it out – it’s a great reminder that Manhattan is, indeed, an island, and of the vital role that shipping played in our great city’s development. 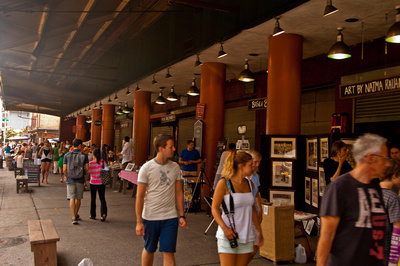 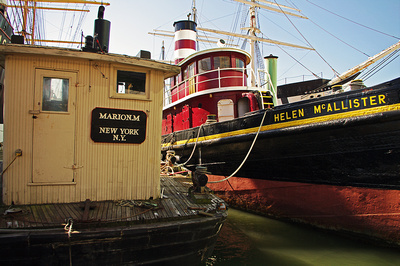