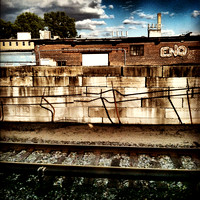 I spend a lot of time travelling - daily by train to and from New York City, and sometimes by plane across the U.S.  From the grandeur of the Beaux Arts masterpiece that is Grand Central Terminal, to the sleek modernity of Chicago's O'Hare airport, the start and end points of these trips offer great opportunities for photography.

And the journey itself deserves documentation, so I often grab a window seat and shoot through the train or plane window, which can be challenging but very rewarding.

En route, I usually rely on the iPhone for most pictures.  It's convenient, quite capable (especially with the Camera+ app) and less conspicuous than a DSLR.  You can also lay it flat against the window, reducing reflections - something you can also do by using a lens hood, preferably a flexible rubber one, on your DSLR. 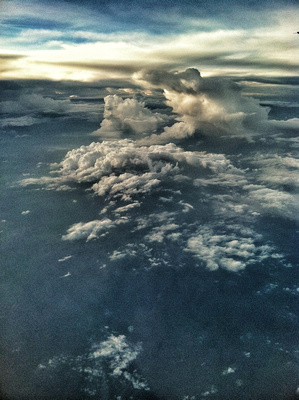 So, I tend to shoot a lot while in motion, whether hurtling through Harlem on the Metro North, or at 30,000 feet over Indiana.  Whether it's the ironic beauty of graffiti on a brick wall or a dramatic cloud formation, I've had a lot of fun over the past few weeks, and it sure passes the time better than reading the NY Post.